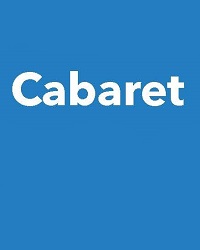 × CABARET Book by Joe Masteroff Based on the play by John Van Druten and Stories by Christopher Isherwood Music by John Kander Lyrics by Fred Ebb Macdonald-Heaslip Hall February 11 – 23, 2020 In the months that precede the outbreak of World War II, American writer Clifford Bradshaw lands in Berlin and soon finds himself at the notorious Kit Kat Klub. There he falls madly in love with the English ex-patriot entertainer Sally Bowles. Their affair is tested as her reckless lifestyle overwhelms him and as the world around them marches towards chaos. Throughout, the Kit Kat Klub’s Emcee taunts and satirizes with dazzling musical numbers in a score that includes Wilkommen, Money (Makes the World Go Around), Maybe This Time, and the unforgettable title tune.